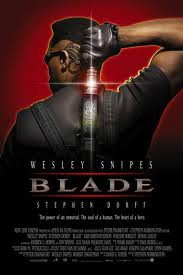 Blade came out in 1998, a slap in the face to 94's vampire fairy tale Interview.  Bleak and unrelenting, the movie tells the story of Blade, a half-vampire, who very simply hunts and kills vampires.  That's it.  It doesn't vacillate and question its own morality, nor does it wax philosophical about power and immortality.  Vampires are evil and Blade exists to kill them.

Yes, okay, yes Blade is half-vampire but he doesn't brood.  He doesn't spend his days mourning his innocence and daydreaming about the might-have-been.  At least not on screen.  Both the character and the film cut through the bullshit, excise the melodrama, and deliver on killing vampires.

That's not to say I don't love a good, melodramatic, gothic love story.  Just not all the time.  Blade appeals to the other half of my psyche.

There is no love in this film, only lust.  No promises of a better tomorrow, no matter how elusive.  And no reprieve from evil, no matter how temporary.  Blade's stoicism is refreshing, if a bit unnerving.  His directness is necessary, and he makes no apologies.  "Get over it," he says to Karen after she accuses him of using her as bait.

The world of Blade is populated by vampires who eke out a careful existence, doing their best to fly below human radar.  Vampire upstarts, young vamps with no sense of decorum, prefer instead to indulge in hedonistic bloodlust, tempting humans with promises of immortality.  Blade's world is populated by Whistler and Frost.  Whistler is Blade's surrogate father, his hunting buddy, and when the need arises, his drug administrator.  Frost is Blade's quarry.  He's one of those upstarts, looking to overcome his "turned" status by resurrecting and becoming a blood god.

Blade's world grows a little bit larger when he meets Karen.  But it isn't by love or accident that Blade opens his world to Karen.  She's drawn in through pity.  Blade takes pity on Karen and tries to save her from becoming a vampire, mimicking Whistler's attempts to rescue Blade from his vampire half.  It's an instinct born from loss.  Both Blade and Whistler lost their families to vampires.  Saving Blade helped Whistler reclaim something of himself; saving Karen might help Blade deal with his mother's death.  But Blade can't save Karen any more than he can suppress is bloodlust.  Karen has to cure herself.  She's a strong character and her strength, together with Whislter's loyalty are Blade's connection to his humanity.  Blade's vampire half is slowly winning the battle within him, and it's unclear how much longer he can hold out.

But this movie isn't really about Blade's inner conflict, as interesting and rife with melodramatic potential as that may be.  No, it's about him preventing Frost from waking a vampire god.  Blade is a vampire-on-vampire action movie, and the action is pretty clean and fun to watch.  Although Blade carries a sword--a katana--the movie features a fair bit of karate.  More notably, the film's fight scenes are underscored by techno music, a pairing that was made trendy a year later with The Matrix in 1999.

Blade is also worthy of closer attention because of its use of CGI.  The '90s were still early days for computer generated imaging, animation, and graphics, and Blade put the technology to use to help Frost achieve his godly transformation.  Sitting where we are today, it's easy to criticize the quality of the graphics and the studio's choice to include them in the film, but Blade proved to be a good testing ground for CGI.  The film made over $100m, and the graphics added to the movie's high visual style of urban horror/fantasy.

A stoic ass-kicking halfbreed, a megalomaniacal villain with delusions of grandeur, a brilliant self-rescuing woman, and a techno soundtrack.  That is Blade. Indeed, other comic book-inspired vampire movies share some of these qualities, but most mitigate their action with introspection, love stories, or werewolves.  Blade just is; unapologetic and dark.
Posted by DM at 17:22

Excellent write-up! The 1st Blade is great, the 2nd was decent, but Blade Trinity is awful and almost unwatchable. (Wesley Snipes looked beyond bored in it!)

I haven't seen Blade in years, but I remember it and the sequel both being great. In fact they're both so much fun that I wonder why no one's ever made a Blade 3.

I think that movie with Ethan Hawke was trying to slap Twilight in the face...

YES! Sharing the Blade love....BRAVO. I've been on a Blade kick recently myself. The only thing I love more than Blade......is Blade II. We'll pretend they never made Trinity.

Thanks all! I remember being a little disappointed with Blade II, but I think it's time I revisit that one.

Kev, I quite like Daybreakers. It was stylish and Sam Neill was great!

Blade's success paved the way for both the X-Men and Superman series.