I love infographics.  If I were good at design, I'd make my own.  Fortunately, there are other geeks out there who are making up for my shortcomings, and today we are blessed with a poster detailing Jason Voorhees' murders across ten movies: 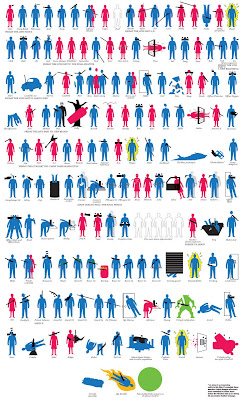 At Fan Expo Canada, this past weekend, I had the good fortune to run into Andrew Barr, the man who created this infographic. It happened completely by accident; I was walking away from TheAvod's table and saw this chart on display.

"Omigod, did you make this?" I asked, sophisticated journalist that I am.
"Yes I did," said Andrew.

He laid it out for me: Andrew drew up the chart for the National Post and from there the thing went global. National Post took it down, but the infographic had gained momentum and could not be stopped. I learned the original chart had a few mistakes, which Andrew has since corrected. Among them, Shelly--the dude who inadvertently provides Jason with the hockey mask in Part 3--was erroneously depicted as a female victim.

Funny story: One day Andrew received a letter from a law firm. Dreading some kind of lawsuit or C&D order, he opened the envelope only to find a personal letter from Larry Zerner, the actor who played Shelly. Now a lawyer, Zerner was writing not to threaten Andrew, but to set the record straight. He pointed out the mistaken gender on Andrew's chart.

I think I originally pulled the chart from liveforfilm.com but I can't be sure. I do remember a tweet about it and grabbing the image right away. I then tweeted my own post and it got picked up made the rounds.

All this is it to say I met the man who made the Jason infographic, he sat three tables down from me at the convention and I didn't know it until 5pm on Sunday. Be sure to visit his site and check out his art, including Michael and Freddy infographics.
Posted by DM at 11:01

Okay, a couple of things on this one: They really should be in order of release, but more importatntly:

1 - Burt had a branch through the chest, not head (his head smashed into the 'happy face' carving.

2 - Alexis was killed with a Scalpel, not a straight razor.

3 - The 'Five More Jason-style murders' should be between the FBI and Alexis, not at the end, and billed as 'offscreen', since, unlike Paul, their deaths have been confirmed.

As Jason nerdity. You're the worst kind.