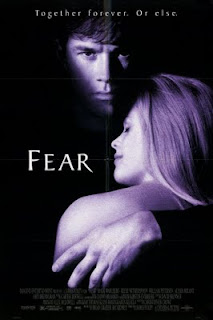 Like the song says, we're going back in time.  All the way back to 1996, an Olympic leap year of nautical disasters, Beast Wars, and what might be the longest prison sentence ever handed down.  Alanis Morissett became the youngest artist to win Album of the Year, GM's EV1 was put into production, and 2Pac died of acute lead poisoning.  On the big screen, genre fans bore witness to egregious plot contrivances (Independence Day), flying cows (Twister), paradigm shifts (Scream), and Steve Buschemi stuffed into a wood chipper (Fargo).

It was also the year Mark Whalberg contributed nothing of note to film and television.  A year after his appearance in the acclaimed Basketball Diaries, and a year before he dropped trow as Dirk Diggler, Mark Whalberg starred alongside Reese Whitherspoon in a quiet little thriller about obsessive, psychotic love.

Fear is certainly not the best movie out there, but it succeeds where so many others like it fail; it's a believable teen thriller.  And it was rated R.  Of course, an R in '96 is a very different thing from one today, but the rating speaks of a movie that doesn't pander or pull any punches.  The film isn't overly violent, and most of the action is saved for the climax, but Alyssa Milano gets the shit kicked out of her, and William Peterson is repeatedly pistol whipped.  Reese Witherspoon's relationship with her father is completely believable and her behaviour accurately reflects that of a love-struck teenaged girl.

Nicole meets David at a party and the two fall almost immediately in desperate love.  Only David's love for Nicole tends toward possessive obsessiveness.  It becomes a real problem when he attacks Nicole's best guy friend, Toby, but David's appropriately apologetic and Nicole can't help but forgive him.  But their second honeymoon period is not to last and again Nicole breaks it off, this time in the most passive-aggressive way possible, by not returning his calls.  Spurned, David turns on Nicole, on her family and friends, and the movie reaches it final, climactic personality clash.

It's a pretty straightforward story, and probably takes too long to get going.  Although it follows a standard three-act structure there is a very clear division in the plot: before David turns scary, and after.  But the argument could be made the film is following Nicole's arc, and hers alone.  She is the central character and the object of David's "love".  As such, the relationship evolves in her time because it is her narrative.  Indeed, the audience is privy to David's emotions and actions, but only as a set-up for conflict.  In this sense the movie hums along at the pace of teen romance which needs time for its passions and melodramas.  And when the relationship finally tanks, it happens fast and with devastating finality.

Underscoring the Nicole-David relationship are all the other secondary inter-personal relationships that support the plot.  Nicole doesn't really know her father or his wife, but she's loved at home and is well-adjusted.  The family clashes in numerous vectors--as all families do--but not enough to take away from the main David-conflict.  Rather, the family dynamic reinforces belief in the characters, their situation, and the action they take.

Most teen genre films are straight-up horror movies, and PG-13 slashers at that; Fear is kind of an odd duck with its lack of nudity, low violence, and R rating.  Despite its quirkiness, it is far superior than most other teen chillers.  Through its careful control of pacing and on-screen relationships, the film is wholly believable as a study in teen-aged relationships and, albeit, fucked-up love.
Posted by DM at 22:53

I don't know if I'd call it a guilty pleasure, but for some reason I dig this film. It kind of reminds me of "Straw Dogs" at the end with the siege of the house. Wahlberg was a pretty decent psycho.