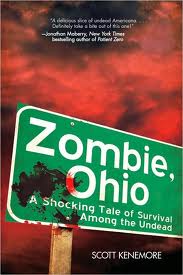 I'll be honest, I don't read a whole lot of zombie lit.  I read Monster Island last year because my roommate had it and loaned it to me.  Every now and again I take up space in the bookstore debating whether or not I really want to buy World War Z.  I never do, of course--buy WWZ.  And I have yet to read the two sequels to Monster Island.

So it was with little familiarity with the genre that I sat down to read Scott Kenemore's Zombie, Ohio.

Not to give too much away, but Ohio, indeed the whole world, is suffering through a zombie apocalypse.  Peter Mellor doesn't remember much about the time before the zombies happened because he is a zombie.  Possessed with little more than consciousness, some fuzzy memories of his living life, and a passionate desire to eat brains, Peter takes to roaming Knox County.  He fills his days with philosophic musings on death and undeath.  What are the ethics of zombiedom?  Are the undead bound to a moral code of conduct?  Is it possible for a zombie to have a spirit animal, and if so, does it have to be a turkey?

Peter explores these questions and others as he journeys through Ohio.  In much the same way as he occupies a plane between living and dead, he waffles between being on the side of good and just going to town, eating every brain he stumbles upon.

And he so very much wants to eat brains.  I think that's what I enjoyed most--the "return" to zombie "roots".  Granted, it was Return of the Living Dead that introduced and canonized the zombies' hunger for grey matter, but, in my limited experience, few zombies today embody that passion.  So yeah, Peter eats a lot of brains and oh my, do they ever taste good.

What I didn't enjoy so much was the unfulfilled expectation of a first-person account of a (former) man trying to solve his own murder.  The back of the book would have you believe Zombie, Ohio is, in part, about Peter investigating his own death.  It isn't.  It's a side-plot, the resolution of which raises some interesting questions about actions, reactions, and consequences.  What the book is actually about is Peter's journey through his after-life, the things he sees, the things he does, and the people he meets (and eats).

Zombie, Ohio is not a heavy read, despite all that stuff about philosophy and junk.  Between bouts of melancholic introspection, Peter does enjoy moments of levity and the book is more uplifting than this review might suggest.  True a lot of people get eaten, and maybe they didn't all deserve to die, but it is a zombie novel after all.
Posted by DM at 20:16

Great review. I haven't been giving zombie fiction that much attention either lately, though two years ago I bought several zombies books because they were all over the horror section and wanted to see what they were like. I enjoyed a few -- World War Z being the best of them -- but most of the others I couldn't even finish. This Zombie, Ohio book sounds interesting, however, so I may give it a try. Aside from some of the scenes in Monster Island I haven't ever read anything from the point of view of a zombie and am curious to see what it is like.