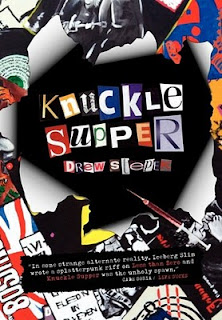 Main character RJ lays it out for us: Vampires can't fly, change form, do magic, or make other vampires.  What they can do is tear you to pieces and eat you up. They're fast, they're strong, and they're mostly assholes.  It's the drugs--it makes them selfish, brutish, and without pity.  Although vampires need blood to live, they need drugs to survive.  Heroin, coke, meth, whatever.  They all have their preferred drug and the gangs they run in distribute their drugs of choice.

RJ is the leader of the Knucklers, a small-time gang with illusions of grandeur all of whom are hooked on H.  Into his shabby life strolls Bait, a 12 year-old prostitute.  For some unknown reason, RJ can't bring himself to kill her.  Even after she totally embarrasses him by dressing goth and dragging him to a "vampire" club.  RJ tries very hard to dispossess Bait of her romantic notions of vampires and vampirism, but she refuses to believe him.  Even after she's totally brutalized by RJ's gangbangers.

Soon after he takes in Bait, RJ's pitiful life begins to unravel.  Not only is he nearly busted by LA's vampire drug lord for back-door dealing, his gang is falling apart, and an old acquaintance has got it out for him.  And then things start going really wrong.

Knuckle Supper is unrelenting and unforgiving.  RJ's self-centered first person narration makes for a challenging read because he is, for all the world, a complete dick.  RJ's only redeeming quality is that he doesn't abuse or murder children, but he treats Bait as little more than a pet--a puppy that needs indulgence from time to time.  But still the book draws you in.  Probably because it's so open and brutal.  RJ makes no excuses for his behaviour; he is what he is, a violent, drug-fueled killer.

Partway through the book, the story takes a sharp turn.  It's a little jarring, and this reviewer wasn't entirely sure about things.  I was worried the story, which was chugging along quite nicely, was about to suffer derailment.  In truth, there is a bit of a slowdown, as RJ is removed from one plot and dropped into another, but the interlude proves to be extremely enlightening and Stepek writes us a brand new origin story for vampires.

Vampirism has often been associated with disease--a blood-born pathogen.  Recently, drug abuse has worked its way into the subtext.  What Knuckle Supper lacks in subtlety is made up for in creativity and balls.  Beginning at addiction, the book explores how and why its vampires exist in a perpetual state of needing-to-get-high.  The answers, when they come, are outrageous and damning.  I said Knuckle Supper has little to do with "classic" vampires, but the truth is religion still has a role to play.  Rather than exist as abominations of God, RJ and his ilk are divinely inspired creations.  They may be druggie murderers, but their lives, like all life, are miracles.

What begins as an outspoken, unglamourous story about street life and abuse turns into a condemnation of religious fundamentalism.  Stepek doesn't hold back and the book is, at times, a dirty, violent read.  With no clear good guys or bad guys, Knuckle Supper's moral ambiguity only serves to further its point about choice: not everyone gets to choose their life (vampires), and those that do (humans) can choose poorly.  And for those like Bait, who have few options to begin with, it helps to have someone around who cares--even if they are a vampire.

I guess Knuckle Supper is a bit of a romantic melodrama, after all.

Perhaps it's with Bait in mind that Stepek and his publisher have joined with Children of the Night, a charitable organization that assists and rescues child prostitutes.  Up to 10% of the revenue from Knuckle Supper will be donated to the non-profit, helping to provide specialized intervention and care.
Posted by DM at 13:36

Nice review. Just like you I have been a bit turned off by vampire fiction lately, but enjoyed reading this novel and really hope it marks a new direction in the vampire genera.

Thanks! Wasn't at all sure what to expect from this book, but it certainly wasn't the gut-punch I received. A great read for sure.

Great review ! I enjoyed reading of it else I have been a turned off by vampire fiction. It is really very nice written article :)