In a dank corner of my parents' basement untold horrors lurk.  And I'm not talking about my dad's country music collection.

While I was sorting through my own piles of stuff, my mother enlisted me to help her move the vinyl from one corner of the basement to another.  Two hours later I was covered in dust, clutching a record I'd not seen in years.

"I remember this," I said to the empty room--my mom had long since gone upstairs.  "I always thought it was creepy."

"What?" Came a distant voice.  "Are you done yet?  Don't forget to shuffle those vacuum cleaners about."

I turned back to the records.  I found three in total--three album covers that rival any metal band for nightmare-inducing visions of hell. Most of the vinyl in the basement is classical music, and while some classical music lends itself well to horror, classical album covers are generally pretty sedate, featuring images of conductors and opera singers, and the odd Van Gogh.  But every once in a while, a music publisher releases a record with a picture that comes straight from the id, a seething mass of nightmarish colour and form. Okay, this might not be the most terrifying image ever put out by the music industry, but the man's got a chamber orchestra for eyeballs. 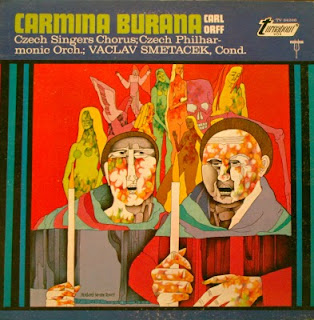 Here two gentleman are pictured holding candles while topless women, angels, and a skeleton cavort in the background.  The monks' faces are vaguely skull-like, further lending a deathly quality to the picture

But that's all just a prelude to the ultimate find: 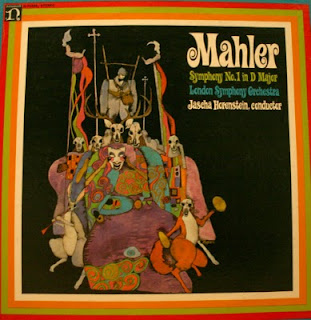