Night of the Living Dead Live 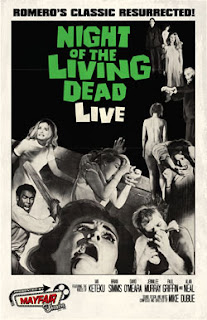 Confession time: I had never seen NOTLD.  Shameful, I know.  But then Ottawa Bluesfest happened and I noticed one of the performances was something called Night of the Living Dead Live.  Why a music festival was screening a movie is outside the purview of this review.  What I'm here to talk about is the show.

NOTLD Live first screened at the Mayfair Theatre in Ottawa back in March.  Stripped of its soundtrack, the film plays while a band, a foley artist, and a handful of actors supply the sound.  It's a fun experiment and the result is an entertaining viewing experience.

Having never before seen the movie, I can't comment on the actors' ability to recreate the emotion and drama present in the film.  All I can say is I liked what I heard.  The music was great--re-written for the show, I believe--and the sound effects were great.  I think, for a first-time viewing, I couldn't have asked for a more immersive experience.

Not all the dialogue and sound effects synced up perfectly all the time, but that didn't really matter.  Having the sound play live is a whole new kind of film-going experience.  Scratch that, it's not new.  It's old.  Reminiscent of the days when a pianist played while cowboys robbed trains and dogs rescued children on screen, NOTLD Live manages to recapture some of that early magic though the combination of filmed action and live sound.
Posted by DM at 15:12