Hanukkah: The Festival of Frights

Hot of the press at Dread Central comes this holiday horror-themed announcement: a Hanukkah horror movie is in the works.  It's like my prayers have been answered!  I gotta be honest, though, I'm not overly impressed with the plot:

Obediah Lazarus is the son of Judah Lazarus, the original Hannukiller. In 1983 Judah terrorized NY for seven nights and was preparing to sacrifice his eight-year-old son, Obediah, on the eighth night. Judah was convinced it was God’s will, like Abraham and Isaac, to sacrifice his only son to God. Luckily for Obediah, police tracked Judah down and stopped the sacrifice, but Judah was gunned down in the process. Warped by hatred with no guidance, Obediah Lazarus becomes a religious extremist, intolerant of non-Jews, "bad Jews", and those he perceives to be enemies of the Jewish faith. He is about to unleash eight nights of horror.

A group of Jewish teens are getting ready to party for the holidays but are in for a Festival of Frights. With the help of a wise rabbi, they deduce that the murder victims have violated Judaic law and that their only chance at survival is to embrace their faith.

Judah Lazarus?  Wise rabbi?  Hannukiller?  Okay, that last one's pretty good.  In fact, the back story sounds better than the actual film.  But those are just words.  Let's look at some pictures! 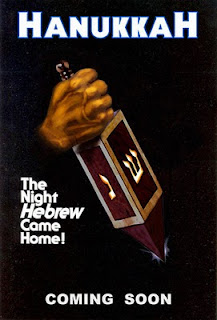 The original Halloween poster is easily one of the greatest movie posters ever conceived by man, so I like what they've done here.  Only it kind of makes it sound like "Hebrew" is the dude's name.  And that's a terrible name. 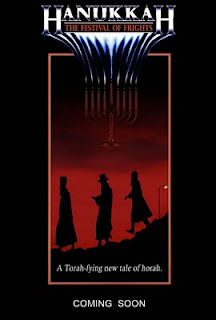 Again with the Halloween refs.  But it works and I like this one better.  The tag line, however, makes it seem like the copywriter doesn't actually know anything about Judaism and just threw down some words. "A Torah-fying new tale of horah" makes absolutely no sense.  If one were to Torah-fy a horah, you'd, well, I'm not really sure what you'd do but it would probably take a long time.  Like a whole year.  That's a lot of dancing.

Am I looking forward to a terr--Torah-fying alternative to The Hebrew Hammer?  Yes!  Will this movie be it?  Probably not.  Is this all an elaborate prank?  I'm inclined to believe so, but they've got a Facebook page so only time will tell.

Finally! I haven't been this excited since 2 Live Jews...

Yes, I still have their album on cassette. Featuring the smash hit "Oy, It's So Humid!"

Hysterical! If this is for real, then I will never live up the hype - if it's a joke, I bow down before the creators of it!!!