What Scares Me: Body Works

In this second installment of "things that scare me because I'm a big wuss" I take a look at some frightening body-related weirdness.  I should probably tell you, I watch my share of violent movies and though I cringe appropriately at all manner of bodily tortures, there are some things that just get under my skin.

I couldn't bring myself to image search "torn fingernail" so I went with the relaxing manicure instead.
As seen in The Texas Chainsaw Massacre (2003), District 9, Syriana
Even worse than watching amputation or tooth extraction is watching someone get their nails torn out.  Whether it be from a desperate attempt to extricate oneself from a bad situation, due to mutation, or as a form of torture, nail-tearing-out totally grosses me out.  Hard to imagine that something so small would induce such strong emotions.

As seen in every other goddamn movie but especially in Saw II
I hate needles.  When I was little I was in the hospital and had to get a needle and it really hurt and I've been scared of them ever since.  And then there was this one time I had to get a needle in my throat...  So yeah, people getting stuck with needles never fails to make me shudder.

As seen in House on Haunted Hill (1999), The Poughkeepsie Tapes
This is a little different from the other two, but you know how you can recognize some people by the way they walk?  That's because we move in patterned, predictable ways.  It's a matter of physiology.  But when people move in ways that aren't possible or don't make sense, I get weirded out because it goes against the natural order.  Try as I might, I can't reconcile what I'm seeing on screen with what I know to be true about human anatomy. 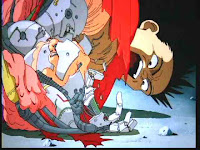 As seen in Akira, Planet Terror, Slither
I saw Akira years ago.  Tetsuo's mutation was gross then and it's still gross now.  Tarantino's penile dysfunction in Planet Terror is equally disgusting, though we don't really get to see it (thank god!).  And Michael Rooker's nightmarish chest tentacles in Slither are in a whole other category of "ew."  I purposefully left out District 9 and similar films because I'm talking sudden, wildly unpredictable mutation.  There's just something about your body turning against you, it's the ultimate loss of control and is completely horrifying for everyone involved.
Posted by DM at 18:47

Aaaagh completely agree with you on the nail thing. The scene in the fly where his fingernails completely fall off? Forget about it. And Syriana is by far the worst offender of this trauma. Oh my god...

Seriously, just thinking about it makes me shudder. Gah!