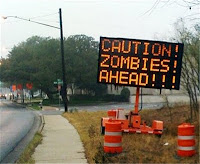 Hacked road sign.
For a lot of reasons, Count Vardulon is a weirdo.  One of those reasons is his habit of walking out on movie trailers.  I'm not going to get into why he does this, but his staunch refusal to learn anything about a film before it comes out sometimes results in his missing out on some truly creative and impressive movie marketing campaigns.  The film business is inherently risky--there's no real guarantee you'll get a return on your investment--so studios dump obscene amounts of money into marketing their films, aggressively campaigning for asses in seats.

Some of the best marketing, however, takes place outside the cinema or television arena.  By turning their attention to the Internet, some filmmakers have succeeded in building a reality around their product through websites and online video--a reality that legitimizes their filmic creation and expands the world of the film beyond the confines of the cinema.  Not only does the potential audience learn about the upcoming movie, but people are actively engaged in the film's story before it hits theatres.  Moreover, the film's online presence helps keep people interested after their movie-going experience has ended. 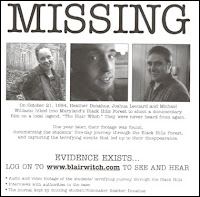 The first and perhaps best example of this marketing technique is the campaign for The Blair Witch Project (1999).  The movie purports to be found-footage that documents three friends' final days before their disappearance.  Around the time the movie came out, videos were available on-line that lent further credence to the "reality" of the film.  News stories, documentary footage, and police reports all supported the claims made by BWP's disclaimer--that it's all true.  For weeks after the film's release people believed, fully and completely, the movie was real, and their (for lack of a better term) gullibility speaks not only to the effectiveness of cinema verite-style horror, but to the persuasiveness of a well-executed marketing campaign.

Similar in style to BWP, but different in execution and intent, was the campaign for another found-footage mocumentary, Cloverfield (2008).  Capitalizing on social networking, Cloverfield's characters had (and still have) MySpace pages, which managed to give them a life that extended beyond that which exists onscreen.  In much the same way BWP's satellite videos and websites convinced us Heather, Mike, and Josh were real people who really went missing, Cloverfield used the Internet to breathe life into its creation.  Additionally, the Cloverfield world was further expanded upon by way of websites for companies that exist in the film, and through the availability of Slusho!* tee-shirts.

More recently, The Crazies (2010) followed in the footsteps of both BWP and Cloverfield but met with less media success, which is unfortunate given the creative nature of their campaign.  A regular website exists for the film, and from there it is possible to link to the imaginary town of Odgen Marsh.  Arguably, this linkage serves to break the suspension of disbelief, but the Odgen Marsh website is an excellent facsimile of a real small-town website, complete with low-rent design and layout; it's not hard to believe such a place exists.  I found the site via different means, however.  The URL appears at the end of the movie credits with a suggestive lead-in: Find out the truth at odgenmarsh.com  This I thought was an enticing invitation to explore the world of the film and my clicking led me to the website for the chemical plant responsible for the outbreak, as well as a blog by a woman who is convinced the company is up to no good.

Adversiting is a lucrative business, and a round of awards exist for ads and ad campaigns.  Movie advertising exits in a different category than most other products, as the trailer is often cut by the studio (I don't think I need to get into the kinds of problems that arise from studio marketing).  But when an extra effort is made to promote a film outside convention, to get potential and admitted viewers to further invest in the film, the movie can transcend its fictional reality, and maintain a front-of-mind presence for that much longer.

*It should be noted the brand Slusho!, which is a creation of JJ Abrams, appears in "Alias" and suggests both the TV show and the film are set in the same universe.
Posted by DM at 11:29

Evil Things by Dominic Perez has a similar internet campaign. If you haven't seen it yet, you're missing out. We're all still keeping our fingers crossed that it actually gets a distribution deal!

I'll have to check that out. Thanks!

Count Vardulon isn't a weirdo, he's a head-up-his-ass dumbfuck, simple as that. I wasted an hour paging thru his "meh's," shallow bitching and comics minutiae and I still have a migraine. If you find no enjoyment from anything, except for the duo weird fixations on 2000A.D. and Criminal Minds (Jesus Christos!) Why post anything?

So you spent an hour on the internet, reading something you hated. Captivated by its awfulness, baffled as to how someone could spend so much time toiling away on something so pointless and stupid – you found it so awful and useless that you even felt compelled to write about on a number of different occasions…

I fear that we are more alike than you realize. You think I haven’t been where you are, dabbling with criticism? That taste of superiority, the rush of contempt - that can be the most dangerous drug of all! I’ll assume that this addiction hasn’t taken hold of you yet, and that you haven’t returned to my site after the first hour. Good – please, if you value your mental well-being, please keep it that way. I was unable to save myself from this terrible affliction, but perhaps, just perhaps, I can help save you.

Go forth, never return to Castle Vardulon, pretend as if none of this ever occurred – if you don’t, if you continue to indulge this vice, before long you’ll be visiting the Castle on a daily basis, poring through the archives, writing about your hatred – first on the site’s comment sections, and thereafter throughout the Internet, attempting to spread your point of view as far and wide as you’re able. Before long just criticizing Castle Vardulon won’t be enough, and you’ll find other blogs that don’t meet your approval. Eventually you’ll wind up starting your own site, devoted entirely to letting the world know just how many awful blogs there are out there, and you’ll find your life consumed by the effort.

I beseech you, ‘theverysmallarray’, learn from my mistakes, be a more lucid, well-adjusted person than I was, and never again venture into the realm of internet criticism criticism.