Death Car on the Freeway

I was in a bad mood and my friend, Don, naturally concluded the best way to liven my spirits was to hand me a stack of DVDs.  But not just any DVDs, cheesy, 70s genre DVDs!  I really don't know much about the 70s--I don't watch the movies, I don't listen to the music, I don't know the history, and I'm not at all familiar with its cultural norms.  So I had no idea what to expect from a Duel-like made-for-TV movie about a killer on the California interstate.

What I got was a movie about female empowerment, car chases, and explosions.

In an attempt to move away from fluff pieces to more hard-hitting news, Jan begins covering the "Freeway Fiddler" story.  The man targets solo female drivers, running them off the road with his van.  Displeased with how the police are handling the investigation, Jan conducts her own research into the killer, which begins to cause problems for her in the workplace.  Undeterred, Jan continues to pursue her story and enrolls in an advanced driving course in which she learns how to drive both defensively and aggressively.  Eventually, Jan's determination pays off, as she finally gets a lead on where the Freeway Fiddler can be found.

At the risk of sounding presentist, I was surprised by the number and relative brutality of the vehicular deaths in this film.  The Freeway Fiddler claims upwards of 9 victims, and in a brief montage sequence, we're treated to a parade of dead women on the highway.  The film doesn't revel in gore, nor does it harp on murder and death.  In fact, the movie is rather detached from it all, recreating the alienation of at TV newscast.  It is only through Jan's tenacity and emotion that we can connect at all with the victims on screen.

Jan takes a singular approach to her reporting by engaging with the victims and reaching out to female professionals.  She interviews on air a female psychologist, asking her to profile the Freeway Fiddler.  Her progressive thinking is underscored by repeated mentions throughout the movie of women's freedoms and independence, which are themselves manifest through solo female drivers.

But what would be a film about female empowerment without the counterpoint of oppressive patriarchy?  Here again I was surprised at the movie's fine handling of the subject.  Jan's main oppressor his her estranged husband, a news reporter at a rival station.  There's no doubt he loves Jan, but he sees her independence as a kind of lark.  Although he doesn't directly undermine her attempts to advance her career, he warns her about the damage she might do to herself if she doesn't toe the line.  But the ultimate blow is not dealt by the husband.  Instead, it's delivered by Jan's employer; Jan may be a fine reporter but she doesn't understand gender politics and is fired because she simply can't conform.

And now on to the explosions! 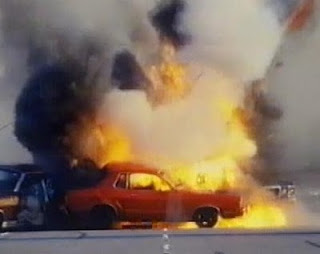 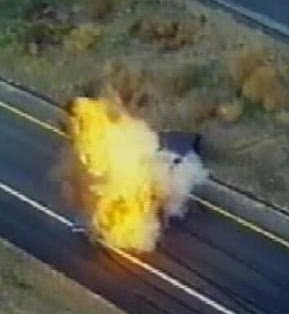 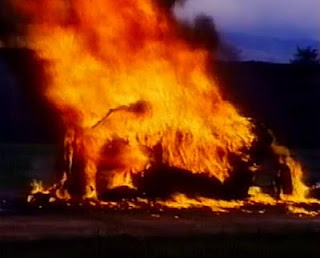 ok so check out the guys doing reviews of cheesy old movies and their creative style of gaining attention on www.cinnemacoolshow.com , ps I know they have only just begun!

Thanks so much for the link! Watched the first ep and loved it.