What Scares Me: Story Elements

Or "things I love that I don't see enough of but if I did I'd get upset because I'll think they're being overused by people who don't understand why these things are so great".  Here is a list of things I've seen in horror movies that have blown my mind and/or creeped me right the hell out.  I'm intending this little foray into my psyche to take place in multiple installments.  In this first post, I recognize some things that are specific to the stories being told.

As seen in Nightwatch, Neverwhere, Ink.
This kind thing can be confusing for the audience without the proper set-up, which is the case in Nightwatch.  But when everyone knows what's going on, having two realities in the same space is an amazing, paradoxical, effect.

As seen in Black Christmas.
A lot of people get a lot of phone calls in a lot of movies, but the mystery caller in Black Christmas stands out as one of the most terrifying.  It's not so much the things he says, which are largely unintelligible, but the manner in which he says them.  Screaming and yelling and breathing heavily, Billy, speaks in a number of different voices, waxing poetic about killing...someone.  The calls are long, agonizing, and they make my skin crawl.

As seen in Vampire Hunter D, Gotham Knight, "Danny Phantom" (numerous episodes).
Yeah, yeah I know what you're thinking: Benji isn't actually a shadow, he just moves inside them.  And yet, like the imagination-enhanced Batman in Gotham Knight and Johnny 13's Shadow in "Danny Phantom", Benji uses the dark to his advantage and overcomes his foes by virtue of his near-invisibility.  This particular power is rare in film and more often than not appears in animated movies and TV shows. 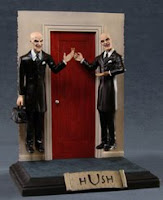 As seen in "Cowboy Bebop" (Pierrot le fou), "Buffy" (Hush).
There's nothing particularly creepy or weird about flying, but we often don't see people fly while maintaining a vertical posture.  There's just something inherently wrong about it, an incongruity that lends itself well to horror.

As seen in Prince of Darkness, and Phantoms.
I don't mean extra as in "more" or "super".  I mean extra as in "outside" or "beyond".  Don't get me wrong, I love a good Satanic panic, but there's something wholly unnerving about an evil force that cannot be understood in Judeo-Christian terms of right and wrong.  Another word for this kind of evil is Lovecraftian and it signifies a force, that may or may not come from outerspace, and that cannot be fought or reasoned with.
Posted by DM at 16:18

I love Prince of Darkness, and also find it terrifying!

It's such a fantastic movie!

Cool post! I did a piece a while back about what ACTUALLY scares people. Wish we had connected back then so you could have been part of it. Oh well!