Terror On TV or When Bad Shows Go Good

My first post ever on this blog was a review of a CSI episode entitled "The Chick Chop Flick Shop" (Season 8 Episode 5).  The mystery revolved around a scream queen's death on horror movie set.  I was big into CSI for a while because it delivered, week after week, murder mysteries that involved hot guys, science, and gore.  It was really only a matter of time before it delved entirely into horror.

Not all prime-time television, however, toes the line like CSI.  Indeed, any procedural or mystery show is bound to have tangential links to the genre simply because they often deal in death and depravity, but these shows, for the most part, have their feet firmly planted in drama.  Every now and again, however, dramas cross that line and either address horror in the abstract, or deal in specifics.  Even if you're not a fan of these shows generally, the horror one-offs are always worth watching. 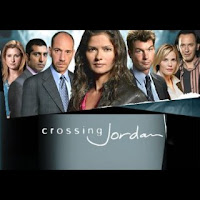 Fresh off her stint on Law and Order, Jill Hennessy took on the role of a troubled medical examiner working under her humourless boss Miguel Ferrer.  Though not the greatest show on television, due mostly to the fact that everyone was kind of annoying, I watched it when it was on and was lucky enough to catch the "vampire" episode.

Like all post 90s TV shows, the cast included a goth character who also happened to be British. So that right there doubled Crossing Jordan's exoticism.  In "Revealed", the ME is investigating a locked-room murder, made all the more curious because the victim has bite marks on his neck.  Things grow more interesting still as we learn the victim was writing a book about a real live vampire.

I'm not a mathematician. But I can still appreciate what I don't understand, so Numb3rs should have been a no-brainer for me.  Alas it wasn't, and I'll tell you why.  Despite the fact that I can't count past ten without taking off my shoes, I caught the tail-end of an episode that knew less about the math than I.  That kind of killed it for me.  But then I saw a preview for an episode about a horror movie and I was willing to give the show another chance.

"Where Credit's Due" is about a string of murders that are nearly identical to a movie that is currently in production.  Obviously the writer is the killer.  Right?  The math comes into play when Charlie buys and then dissects some screenwriting software.  Using his own creative genius, Charlie plugs a bit of story into the programme which outputs some of the most derivative crap imaginable.  Though Numb3rs sometimes fails to be smarter than its audience, this particular episode offers some sly commentary on Hollywood horror. 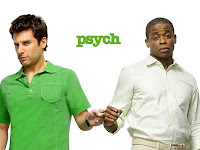 I never make an appointment to watch Psych and I probably should, because I really like every episode I see.  It's unselfconscious and light-hearted without being totally ridiculous, though I do find Lassiter to be too much of a pill at times.   Hilariously, Psych aired an ad that called out The Mentalist for being pretty much the same show.

It's no secret that James Rhoday loves horror movies, and Psych has done a number of episodes that touch on the supernatural, but this particular ep is a love letter to 80s horror, with heavy overtones of Friday the 13th.  And who can't get behind that?  Shawn and Gus are asked by their friend, Jason Cunningham, to investigate a missing camp counselor.  The story takes a few twists and turns in classic fashion, dealing with time-honoured themes of vengeance and forgiveness. 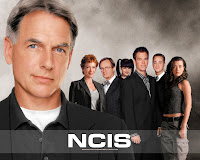 I love NCIS.  And though I just, like thirty seconds ago, made fun of goth TV characters, I would be Abby if I thought I could pull it off.  But though I am pretty much always in a good mood, I love my hair too much to dye it jet black.  Each year around Halloween, NCIS nods at the holiday by setting murder and mayhem in the midst of a costume party, but the show rarely produces an actual spooky episode.

Though not related to any horror movie in particular, or even to the genre in general, "Murder 2.0" is still a shout out to all horror fans.  The team is working round the clock to find a killer who a) posts the murders online and b) leaves clues that lead to the next victim.  It's deliciously postmodern in it's denouement, and the characters sport names like Sam Loomis, Tommy Doyle, and Rose Woodhouse.

In the same way that mainstream dramas take a moment to acknowledge a small portion of their fanbase, shows that deal primarily in the supernatural sometimes come back down to earth.  In "Normal Again" (Buffy, Season 6 Episode 17), Buffy wakes up in a mental hospital--her life as a slayer is a hallucination.  In order to continue living in the real world, Buffy must destroy her imaginary friends.  Though shows like Crossing Jordan and NCIS have fun with the genre, this sort of one-off episode of Buffy takes its subject matter seriously; there's a lot of fun to be had with horror, but real life can be terrifying.
Posted by DM at 16:53

That Psych episode sounds great. Funny show, not my favorite, but I'll watch it if it's on.