Richard Donner's masterpiece follows a group of friends as they adventure underground on the trail of infamous pirate One Eyed Willie's treasure. In hot pursuit are the Fratellis, a family of murderous thieves. The impetus for the kids' treasure hunt is the loss of their neighbourhood. Come tomorrow, the country club will be taking possession of their homes, so Mikey, Mouth, Data, and Chunk, after finding a map in Mikey's attic, set off to find Willie's gold. The first stop on the map is a seasonal restaurant. Though the building is closed, it's not empty and the boys run afoul of Mama Fratelli and her sons, Jake, Francis, and Sloth. Mikey's older brother, Brand, initially chases after the boys to stop them, but gets caught up in the adventure along with his crush, Andy, and her best friend, Steph.

The film takes its title from the name the kids have for themselves, and is used as a way of distinguishing in- and out-groups. But more interesting than the schoolyard politics is the child/adult opposition at work in the film. Though the kids all have parents, the only adults that figure largely in the plot are the Fratellis--the bad guys.

You can't really blame Billy Christal from wanting to pitch her off a train.
More recently, kids' adventure films have focused on family togetherness; though movies like Spy Kids and The Incredibles still rely on kid ingenuity to overcome adversity, the children and their parents present a unified front. I'm not nearly well-educated enough to comment on why the change in story and attitude (maybe the family-oriented oughts are meant to counter the nihilism of the 90s?), but the difference is notable because the earlier films suggest that kids are entirely capable not only of dealing with grown-up issues and situations, but resolving them all on their own, whereas the later films posit that children and parents must work together to combat their foes. I might also make the point that the goonies are being chased by a mother and her sons, which again runs counter to more contemporary adventure films in which the villain acts alone.

Though The Goonies is billed as a "family adventure" the movie itself isn't about the family, per se, or even the group, but about the individual. Each goonie has his or her own character trait that makes them special. For example, hope springs eternal in Mikey, and though he's still just a kid, he understands that he's indulging in a wild fantasy. "It's their time up there," he says to his friends, "but it's our time down here." Mouth's aptitude for Spanish comes in handy at the beginning and the end of the film, firstly to make a joke at the expense of Mikey's mother, and then to stop Mikey's father from signing away the family home. Andy took piano lessons and though she's not very good, her ability to read music helps the group successfully navigate their way underground to Willie's treasure. By contrast, the Fratellis simply follow in the goonies' wake, constantly arguing with one another. 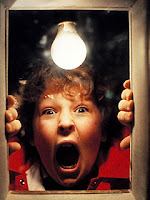 Plus they ate all the Mississippi mud. Those bastards!
Additionally, it's the Fratellis dysfunction that is their ultimate undoing. Mama and her sons, Jake and Francis, operate as family unit, but the third son, Sloth, is not part of the group. Developmentally challenged and hideously ugly, Sloth is kept in chains with nothing but a TV for company. When Chunk is captured by the Fratellis and thrown in with Sloth, he's terrified at first by the man-thing. But Sloth, by virtue of his disability, has retained his innocence and is not a threat to Chunk despite of his size and strength. Joining forces with Chunk, Sloth attacks his family to free the goonies. Mama tries to soothe her misfit son, but the placation backfires as she sings "Rock-a-bye Baby" and the mention of falling babies upsets Sloth, recalling to mind the times when he was dropped as a child. Sloth's ostracism from the Fratelli family in-group, combined with his man-child qualities, make him a perfect candidate for the goonies. He, like they, possesses a special quality (his strength) that helps them defeat the bad guys. Furthermore, Sloth is adopted by Chunk's family, solidifying his place among the good guys.

Far from being perfect, The Goonies is one of the best children's adventure films produced, and can rightfully be likened to Indiana Jones. Focussing on group cohesion that still celebrates individuality while at the same time undermining the family unit, the film is perhaps more subversive than it necessarily means to be. No attempts are made to age the goonies mentally or sexually, and yet the kids display levels of courage and maturity that are unmatched by their adult foes. Few films today can make these claims. 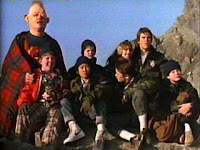 You make some really great points here. Nowadays films are criticized for undermining the family unit, but when you're a kid, your friends are your world!
When I saw this film, my friends and I went looking for our own adventure. We didn't find it, but was fun to go looking :)

Well said! Who wants to adventure with their parents hanging around?

A great review of one of my all time favorite movies. Even better, my brother gave me the DVD for Christmas so I can watch it anytime.

NOTE: Does anyone else notice that when on TV most of the time they cut out the Octopus part? It always drives me crazy.

Seen this about 8 times times at midnight! Love the film.