Normally my trailer reviews are cynical attempts to create a likely story, followed an even less feasible analysis based solely on 90 seconds of content. I'm taking a slightly different approach with the trailer for Frozen.

Following on the success and cinematic appeal of single-location dramas like Open Water, Adam Green has crafted a story that is equal parts character study and people falling from great heights. But, though people have actually been abandoned by their dive boat, it is impossible to get stuck on a chairlift after closing.

But I'm not here to tell you why Frozen fails as a premise. I'm here to point out all the other ways in which Frozen misses the mark. It's an exercise in mind-numbing minutia! Ready? Let's go:

Riding for free
The likelyhood of a liftee allowing people up the hill without a ticket falls somewhere between 0 and -1. The lift ticket is actually a liability waiver, and should you be caught without one, the resort can sue you. No liftee I know would potentially sacrifice a free liftpass for the sake of a girl with whom he'll never score. 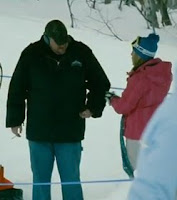 Furthermore, these kids are now limited to the runs served by this one chairlift, which is not a lot. But that might not be such a big deal because...

Athletic ability
...this guy can't ski. It might seem like I'm already going too far by criticizing this poor shmo, but not hiring an actual skier to actually ski totally kills any expectations that this film might contain some amazing skiing and boarding footage.

Sous-bois? I rule bois!
For a number of years I was a certified, professional ski instructor and I can say that though this guy is certainly having a good time, he (and we) would be having a much better time if he flexed his ankles and hips, and moved his centre of mass forward a bit. Following this line of reasoning to its logical conclusion, buddy's poor athleticism will eventually be his (literal) downfall because he lacks the strength to pull himself to the closest stanchion. 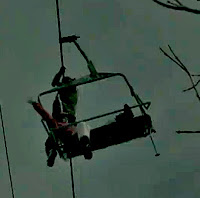 They also don't seem to understand balance.
Safety and preparedness
Along with a mastery of technique comes a mastery of simply looking like you know what you're doing. And that chick is not giving off an air of unflappable self-confidence. Why? Because she's carrying her goddamn helmet. No one does that. You either wear it or you don't. You don't carry one around as an afterthought.

Wear your hood. Zip up your jacket, for chrissakes.
Helmets protect your noggin and can provide much-appreciated thermal protection on really cold days. Helmets do a lot for a person, but one thing they can't do is fit over a toque with a pompom. And anyone stupid enough to ditch their helmet after realizing they're stuck outdoors is equally likely to take off their mitt and put their bare hand on the metal safety bar.

Mechanics
Chairlifts have been around since 1936, and though they have been known to hit people in the back of the legs and unceremoniously dump skiers on their asses at the top of the hill, few have suffered catastrophic failure, and none have, to my knowledge, willfully attempted to murder their riders. 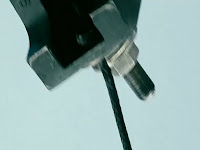 And yet the bolt is still screwed on tightly.
Wildlife
I made the Open Water reference once already, but now it's time to bring it up again. Because getting stranded in the middle of nowhere isn't bad enough, nature's gotta get all up in your bidness and throw some sharks at you. And since wolves are the winter equivalent of sharks, it's only natural that a pack of ravenous lupi would harass the wayward freeloaders. 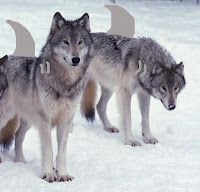 I've skied at resorts with bears, bobcats, and moose. While squirrels and porcupines are likely to be spotted on a regular basis, the bigger animals tend to avoid the crowds, and few developed ski areas are actually home to either wolves or shark-wolves.
Posted by DM at 09:28

That's all fine and good... but what percentage of folks are going to know or care about any of that?
It's no different than the wargamer geeks who whine about the wrong turrets on the tanks in some war movie.
All it means is that YOU shouldn't watch horror movies about skiing.

I'd have to agree with knobgobbler. But at the same time I still believe in the chance that someone could get on the lift without a ticket on a busy day unnoticed by the dweebs that man the lines. We're talking lower end ski resort here anyways.