The holiday season is upon us, people. In fact, it's been here for a while, only now that American Thanksgiving is over, Christmas is fully all up in our face. Let me take this opportunity to get one thing out in the open: I hate Christmas. I hate it with a fiery passion, so much so that there are flames, flames on the side of my face breathing, burning, heaving breaths... 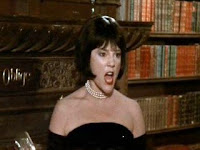 Mrs. White knows what I'm talking about.
It has nothing to do with the fact that I'm not Christian. Half my family is, and my pseudo-aunt's a minister. No, it's more to do with the constant barrage of holiday music, advertising, and mall displays. So I guess really it's the Christmas Season I hate, the forced consumerism under the guise of joyful gift giving. You know, gift exchange used to be an occasion for competition--a non-violent way to mitigate animosities and conflict, and reinforce kinship. And I don't think I need to remind anyone what a capitalist, consumerist society leads to.

But the worst is the goodwill, that forced cheerfulness. I'm all for sunshine and happiness, but why restrict the sentiment to to a few short weeks in December? Why not promote peace, love, and understanding all year round? With these thoughts in mind, I've put together a list of six violent and gruesome films to help get you through the season of joy. If not all Christmas-themed, they are, at the very least set in winter.

The Hogfather. Nothing says yuletide joy like a plot to kill Santa Clause. And when the fat man goes missing, Death takes over his duties.

The Thing. Technically set at the end of summer, the movie takes place in Antarctica, and it's pretty much always winter there, so you know. Kurt Russell battles paranoia and isolation in a bid to save himself and his buddies from an alien life-form. Which, I understand, is not unlike Xmas dinner for some.

Phantoms. Celebrate the winter season with a tale about an ancient evil that eats people's souls and faces. Substitute the story of Christ's birth with that of the Ancient Enemy and how it has, over millennia, destroyed countless lives.

Die Hard. This is one of my all-time favourite movies and I make a point of watching it every Christmas. Though set in LA, it does kind of snow at the end of the film. And not only does it take place on Christmas Eve, it features the same feel-good qualities of your mainstream run-of-the-mill Xmas movies with the added benefits of explosions and Alan Rickman. 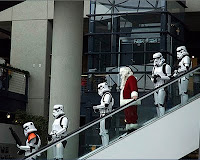 The Star Wars Christmas Special will be a little different this year, kids.
Posted by DM at 08:31

I work at a craft store, and we sell christmas year round, i can handle halloween, i love it. But christmas is too commercial & way too preachy.

Nightmare pretty much goes without saying, but I find that Gremlins kind of flies under the radar--in spite of the fact it has the greatest "why I hate Christmas story" ever.