The Twilight of the Fools

I still don't get the apple.
November draws ever closer, and with it this year comes the theatrical release of New Moon, the second of the Twilight saga books to be adapted for the screen. Penned by Stephanie Meyer, the first book in the series, Twilight, came right out of nowhere and completely took over the young adult market. Releasing a book a year for four years, Meyer quickly reached J.K. Rowling-levels of fandom and made a huge impact on horror literature and television.
But Twilight is not horror. The Twilight saga is about vampires, but that’s where its connection with the genre begins and ends. Meyer herself admits to not liking horror movies, nor has she read any vampire books. Meyer has no interest in, nor is she familiar with, the horror genre, so how comes it that she’s written a horror story?

Women can't be trusted.
The answer is she hasn’t.
Twilight may be many things—a fantasy, a fairy tale, a romance—but it is not horror. Most interesting is the thing that would make Twilight horror, is the very thing that turns it against the genre. Meyer’s Cullen family of vampires are “vegetarian” meaning they don’t feed off humans—they are vampires divorced of their vampirism, living as humans live. They are, in the words of Zizek, “[the] Other deprived of its Otherness”, and it is for this reason that Twilight is not horror.
Horror brings our fears out of the dark. But Meyer’s neutered vampires prevent us from facing and overcoming those fears. Where vampirism once stood for disease, death, history, and transformation or mutation, all of which can be thwarted with an arsenal of Christian symbols and a piece of wood, Meyer has stripped away the symbolism and weaknesses of the undead and replaced them with limitless perfection. You don’t fight against perfection, you strive for it. 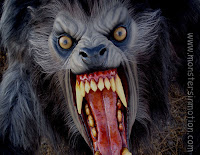 Now that's a fucking werewolf!
In addition to tame vampires, the Twilight saga also features shapeshifters. Though the reading public and the media has generally labelled the shifters as werewolves, there is an important distinction to be made between the two. Shapeshifters change at will, werewolves do not. The original horror of the werewolf is an internal and ultimately futile struggle for control over the self. Meyer’s shifter, on the other hand, only struggles with his emotions and eventually becomes the best shapeshifter. So here again, the horror is eliminated, this time through the removal of the thing itself, and replaced with a coming-of-age tale of excellence.
A Mormon housewife and mother of three, who studied English Literature at BYU, Stephanie Meyer has gone on record saying that her religious values are partly reflected in her story. That’s not to say a Mormon, or any religious writer, can’t produce a horror story, but Meyer’s Twilight is not horror. The presence of vampires and “werewolves”, however, seems to be enough to make it so. The issue is one of identity and is not unlike the sex/gender dichotomy. Twilight looks like horror on the outside, but inside it’s all romance and suspense.

Google "vampire romance" and this is what you get.