I once loaned out a great book about the history of American film to a guy I used to like. He never gave it back. So what could have been a great review peppered with insight on the American film industry in the mid-20th century, will instead be a great review with a creepy picture of Robert Mitchum. 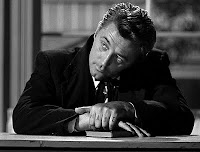 Ben Harper has stolen ten thousand dollars. Before he's captured by the police, he hides the money and makes his children swear they will never tell where it is. While in prison, Ben shares a cell with Powell. Powell learns about Ben's stash, but Ben refuses to tell him where it is. After Ben's execution and Powell's release, Powell sets out to find the widow Harper. Though Willa has no idea where the money is, Powell suspects her children do. But young John Harper doesn't like Powell and refuses to tell him. Powell grows more frustrated and dangerous the longer John holds out, and eventually John and his little sister Pearl run away. But Powell follows, desperate to find the location of he hidden cash. John and Pearl finally find salvation with Mrs. Cooper, a widow who takes in wayward children. When Powel comes calling, Mrs. Cooper vows to protect the kids at all costs.

The Night of the Hunter is a story of greed and murder, made all the more horrifying by Powell's identification as a preacher. A preacher who travels across the country killing widows. This is no third act revelation--we first meet Powell while he's driving a stolen car, engaged in a one-way conversation with God, talking about the dead women he's left in his wake. But though we know him to be a sinister and dangerous man, to everyone else he's a silver-tongued man of God. The film uses this dramatic irony to create an atmosphere of suspense as we watch Powell woo the widow Harper while he menaces her children. 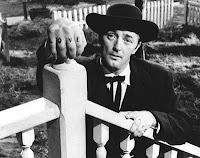 Okay, two for good measure.
Adding to the tension and drama is the fact that the audience is in the same boat as Powell--we don't know where the money is any more than he. And though we certainly don't want to side with Powell, the mystery of the hidden stash draws us in. Partway through the film it's revealed to us where Harper put the money and we're freed from our association with Powell. Not long after this revelation, John and Pearl run away from the preacher, who is now their stepfather, further alienating the audience from Powell.

Set in early 20th century puritanical rural America, small town life serves as a backdrop for Powell's predatory nature. Everyone is taken in by Powell's charisma, and Powell uses his position of authority to manipulate and victimize those around him. On his wedding night, he refuses to sleep with Willa, using scripture as an excuse. In an effort to please her new husband, Willa becomes a zealot, and refuses her sexual desires. Later on, in order to incure sympathy, Powell tells his neighbours that Willa is the one who turned him out of bed. And when John and Pearl are taken in by Mrs. Cooper, Powell preys upon Ruby, a sexually active girl who also lives in the Cooper home, in order to gain access to the house. Powell's charm, however, doesn't work on John, so he must threaten him outright and in stark contrast to the kindly or chaste preacher he pretends to be for everyone else.

Powell's ability to win over the adults who populate the film is mirrored by John's inability to ally himself with a helpful grownup. The only other person John knows who hasn't fallen under Powell's spell is Birdie, a lonely old man who lives by the river. Birdie tells John that he can be counted on for help, but when John needs him, Birdie is passed out drunk. Thus in John's world, adults cannot be trusted. So when John and Pearl find themselves in the care of Mrs. Cooper, John is rightfully closed off. When Powell comes calling, Mrs. Cooper sees through his lies, and John's faith in adults is restored.

Night of the Hunter begins with Ben Harper being tackled by the police and hauled off to prison. It's a traumatic experience for John, and though he doesn't know it yet, the first in a long line of heartbreaks. The film ends in much the same way, only this time Powell is the one taken down. The symmetry proves too much for John and, overcome with emotion, he gives Powell the money. The moment is one of catharsis for John, and dark irony for Powell because the money was with the kids the whole time. 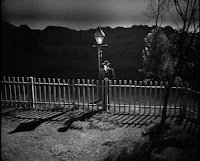 And a third one, because you know...
The picture of the money scattered around Powell's handcuffed figure is only one moment in a film filled with halting imagery. Filmed in black and white (later re-issues are coloured), the sets and lighting create a foreboding atmosphere and spaces of religious mania and danger. The night before Powell enters their lives, John is telling Pearl a story. He's lit by the lamplight shining through his bedroom window, and just when he reaches a crucial point in his story, Powell's shadow falls over him, foretelling the dark days ahead. Powell and Willa's bedroom, a place where a normal couple would consummate their love, is all sharp edges and pointy angles, very church-like in its design and represents at once, Powell's chastity, his hold over Willa, and her subsequent descent into religious madness. When Powell has the children cornered in the cellar, he towers over them at the top of the stairs hurling threats down at them as they cower in the dark.

But the greatest thing about The Night of the Hunter is Robert Mitchum. He is incredibly menacing and cold, and I'm sure there's a comparison to be made here between his Powell and his Grady in Cape Fear--a character who is equally single-minded and dangerous--but I haven't yet seen the latter. Suffice it to say that he had me on edge the whole time as he relentlessly pursued that ten thousand dollars, wooing and charming and murdering his way to his goal.
Posted by DM at 12:27

This is the movie which prove Old is Gold.You really can see the reason of it if you watched this movie.Good direction and scripting of the movie.Each character done their role to best.