But only a finite number of ways that terror can manifest.
An event horizon is the edge of a black hole, where everything disappears into the dark; it is the point of no return.

Forty years after its disappearance, the spaceship Event Horizon has returned and is in high orbit around Neptune. Laurence Fishburne and his crew are dispatched to rescue the survivors. But there are no survivors. The ship is derelict, a ghost ship floating in space. With the rescue team is Sam Neil, the man who designed the ship's special engine. The Event Horizon can open a black hole and travel beyond the limits of known space. Unfortunately for the everyone, the ship traveled well beyond the limits of reality. As the team explores the ghost spaceship, they begin to hallucinate, seeing things that aren't there.

The first time I saw this movie I was more confused than anything else. Though I understood the plot, I didn't really get it. I thought it was stupid the way everyone just accepted their hallucinations as truth. And the revelation at the end, that the ship went to hell, was too much. I was a bit more forgiving the second time round. The hallucinations, I now understand, are brought on by the ship's ability to get inside people's heads and exploit their guilt and fears. And the very reason the ship can do that is because the Event Horizon is, in fact, alive. Possessed with a life force of it own, the ship uses the people on board to carry out its will. And its will is to inflict pain and suffering.

Space has no religion.
When the original crew of the Event Horizon fired up the singularity drive, they traveled to an alternate dimension where they tortured themselves and each other death. When the ship returned from the "hell dimension" it brought that anima back. I either wasn't paying attention or didn't care to register this information when I first saw the movie. Now that I have a better handle on the actual story, I can say that it really isn't as stupid as I first thought.

What is stupid is that no one does anything about it until it's way too late. As the film progresses, as the rescue team slowly tries to piece together what happened to the Event Horizon, Sam Neil grows ever more unstable, but no one takes any action. They just continue to let him wander around. Additionally, other crew members are unforthcoming about their own tenuous grip on reality, which only furthers the danger they pose to themselves and everyone else. So though I find the heart of the story compelling in itself, the execution is just irritating. I won't go so far to say these people deserve to die, but they certainly don't help themselves any to survive.

Don't go toward the light!
What's more is that the mystery of the hell dimension is wholly underexploited. It's only toward the end of the movie that it's made clear to the audience what happened forty years ago, and this is done through the briefest of montages. The hell dimension is good stuff, but we're only treated to a few seconds of torment. If the film were to evenly distribute the mystery and the torture throughout, rather than pile it all on at the end, then we would have a more thorough blend of horror and sci-fi. The creeping atmosphere of the haunted ghost ship is good stuff, but it fails to carry the film.

Additionally, those few moments of torture show Laurence Fishburne's crew. This fleeting detail raises a question about the very nature of the reality of events on screen. Are people really wandering about the ship, or do they just think they are when in fact they're being tortured? What are people really seeing and doing when they hallucinate? Frustratingly, the film provides no answers, just explosions.

Be that as it may, I didn't hate Event Horizon the second time. It's certainly a lot creepier than I remembered, and the gore effects were pretty good. Also, the engine room that houses the singularity drive has this dark steampunk quality to it that appeals to me, and which is offset by the white-tiled liquid sleep camber and the stainless steel sick bay. Overall, the film's look and feel are effective, combining utilitarianism and art to create a place that is at once threatening and sterile. The CGI has aged poorly, but that's not really anyone's fault.

Given the opportunity, I'd probably watch this film again. 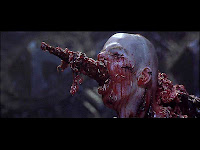 I'm not saying I like this kind of thing, but I could have seen more of it.
Posted by DM at 21:42