That's Doctor Acula To You

Suddenly, I want to watch Fright Night.
Truth be told, I saw this movie quite some time ago, but realizing I didn't want to ever watch it again, I wrote this entry back in April and sat on it till I caught up with myself*.

*I have since watched this movie again.

James Woods is a vampire hunter. Not only that, he was raised by the Catholic Church to be their premier vampire hunter; it's a little known fact that vampires exist, and the church has been slaying them since the 14th century. After finding and killing all the vamps in a nest, James Woods is somewhat perturbed that he failed to find the Master, the lead vampire. That night, the Master rises and arrives at James Woods' motel where he and his crew are partying. The master kills everyone, sparing Daniel Baldwin and James Woods, and bites one of the hookers. Also, he seems to know James Woods' name, for some reason. The prospect of having been sold out is a little disconcerting, but it takes a back seat to James Woods' vampire hunting. Using the hooker as a kind of remote sensor, James Woods and Daniel Baldwin zero in on the Master. With the help of a priest, the pair learn that this particular vampire happens to be the first vampire, and worse yet, was accidentally created by the church in an exorcism gone wrong. Valek, the Master of master vampires, is now searching for a special cross that will immunize him against sunlight. It's up to James Woods to stop this evil!

Spot the vamp.
Sounds promising, I know. It's based on a book, which I'm unlikely to ever read, so I'll never know if the story is really all that good. The film, however, in spite of having a lot going for it, is actually kind of dull. Even the action lacks, well, action. It's almost as if John Carpenter was already bored with the film before he started making it. I myself got bored watching it. It wasn't so much the watered-down action or the even more watered-down Daniel Baldwin, it was the overly simplified plot.

First of all, and I've already alluded to this, James Woods has been sold down the river. This doesn't bother him nearly as much as it should. Secondly, both James Woods and Valek come into knowledge way too easily. There are no obstacles in their way, no struggles to learn more about themselves and each other. The two adversaries literally follow a map to their final destination. The story has a lot of down time and the plot is uniformly (read: slowly) paced. However, you don't get the feeling, like with Memoirs, that a lot of the action is happening between scenes. Rather, everything in Vampires happens on screen--it's just that not a lot happens in this movie. 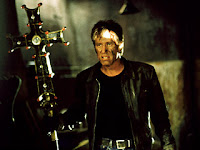 James Woods on James Woods: You have got to be kidding me with this shit.
Vampires has some of the look of and a lot of the sound of From Dusk Till Dawn, but none of the feel. James Woods quips from time to time, but the jokes seem out of place. The film takes itself much to seriously for boner jokes, and because James Woods is the only one who fires off the occasional one-liner, the humour is lopsided and end up falling flat.

*Upon second viewing, I've reassessed the humour and found the movie to be kind of funny. I think this is due entirely to James Woods doing his best to lighten the mood with his constant swearing, tough guy attitude, and off the cuff penis jokes.

A later entry in the John Carpenter catalog, Vampires is really more boring than crazy. On the plus side, it does feature a dig at Anne Rice: "[Vampires are] not romantic. Its not like they're a bunch of fuckin' fags hoppin' around in rented formal wear and seducing everybody in sight with cheesy Euro-trash accents." Considering the film is so bizarre and Carpentery-yet-not, and co-stars a Baldwin, I have to side with crazy. And you'd have to be crazy to make a vampire movie boring. 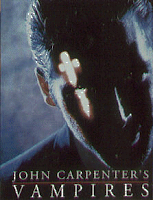 I'm pretty sure this person does not appear in this film.
Posted by DM at 12:39