The man can surf fire!
For a long time I claimed that T2 was the perfect sequel. I still stand by that statement, but I'd like to add that Escape From LA is also the prefect sequel but in an entirely different way. Where T2 put a new spin on an old story, Escape From LA is exactly the same movie as Escape From New York.

Fifteen years after Snake Plissken escaped from New York, he's back in custody and brought to Los Angeles, now an island where America sends all its rejects. The deal's the same, only the players are different: Snake must retrieve a doomsday device stolen by the President's daughter, which is now in the hands of a dangerous anarchist. He has ten hours to find the device and return to base else the disease now coursing through his veins will kill him. 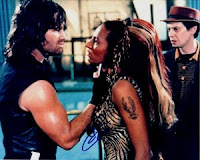 Not pictured: Bruce Campbell, who's also in this movie.
Escape From LA is a bigger movie than its predecessor, but it's just as campy. Perhaps more so, as Kurt Russell surfs a tsunami through downtown and engages in a hanglide battle. Other than a few production-value related embelishments, the film follows the same plot as the first one, including the random death of a would-be lover, Snake having to engage in athletic competition to save his life, and him getting shot in the leg. The film is so aware of the fact that it's a carbon copy of Escape From New York, characters try to ensure against Escape From LA ending the say way.

But you can't keep a man like Snake Plissken down. And this time Snake makes sure there will be no third movie.

Yes, it's a car covered in doll heads.
Following on the disappointing Village of the Damned, it's hard not to give Escape From LA a crazier rating that it probably deserves. Carpenter is back on form with this one, exploring the same darker territory we've come to expect in his better films. Snake is a great character, completely unrepentant, and the world he inhabits is an oppressive and terrifying theocracy. Though I've argued that this film is exactly the same in every way to the one that came before, I have to say it's also a bit of an improvement. Where the first Escape suffered from a few pacing issues, LA smoothly moves from one scene to the next as Snake tries very hard to stay on mission but keeps running into trouble. Carpenter was a better, more experienced filmmaker when he sat down to Escape From LA, thus one is right to expect a more polished but no less crazy film.

The decision to just remake an old movie, to go with a winning strategy, I think says a lot about Carpenter's sanity. And his balls.

craze-o-meter: 3.5, just as crazy as the first time round, only more