Children of the Damned

Village of the Damned

Needs more corn.
This movie is based on both "The Midwich Cuckoos" by John Wyndham and the screenplay for the film made back in the 1960. I thought that was a bit strange, but then again, I can't really remember how the old movie differed from the book. So maybe, this 90s version incorporates elements present in both?

Midwich is a small all-American town. Nothing out of the ordinary ever happens there and life is very pleasant. And then one day, everyone falls unconsious. Six hours later, the townsfolk wake up and a number of the women find, to their surprise, they're pregnant. All the babies are delivered healthy, save one who is stillborn. As the years pass, the children grow ever more strange. They all look alike, are devoid of emotion, and can control people's actions with thier minds. As people start dying, the townies begin to suspect the children, and eventually decide to take matters into their own hands. But the kids can read minds, too, and are wise to their plan.

And they all have the same bad taste in clothes!
Not gonna lie, though the story is pretty nuts, the movie is rather tame. It's not as dull as some of Carpenter's other work-for-hire gigs, but it's a definite step down the crazy ladder. Funnily, this film, more than any other I've watched to date, clearly draws a line between the script's potential and the director's vision. I feel like this film could have been a whole lot crazier, but Carpenter, for whatever reason, didn't pull out all the stops.

I think it's for this reason the movie fails to be any good. It's a bit painful, really, to see all that wasted potential, the lost opportunities. I'm so disheartened that I can't even properly finish this review.

craze-o-meter: 2, oh what could have been, oh what never shall be 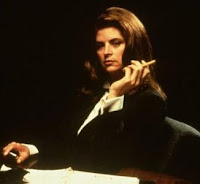 Would you trust this woman with your children?
Posted by DM at 12:25