All Out of Bubblegum

Not the they from They, a different they but they're no less threatening.
I reviewed* this movie a while back (link can be found in the Reviews section), so this installment will be rather short and with fewer f-bombs. Suffice it to say that although Carpenter did not write They Live, and that it is, in fact, based on someone else's story, it still feels like a Carpenter film complete with prolonged shootouts, minimal dialogue, and surprising editing.

Roddy Piper finds a pair of magic sunglasses that reveal to him the truth about an alien plot to take over the world. The first time I saw this movie, I missed the end. I've now see it all the way through and I can say that in spite of the fact that Roddy Piper does not ride off into the dawn, it still ends well.

It's got a very cool title sequence.
They Live is crazy, kind of like how Prince of Darkness and The Thing are crazy, but also in a different way. That actually doesn't make any sense. They Live presents us with a message about authority and free will, and takes a rather cynical stance on these issues. The characters of Nada and Frank, played by Roddy Piper and Keith David respectively, embody two different approaches to confronting and dealing with those in power. Nada learns the truth by accident and takes it upon himself to change his fate, although he has no idea what he's doing. Frank, on the other hand, refuses to listen to what Nada has to tell him. Similarly, Prince of Darkness showed both sides of the coin with the physicist and the priest, and The Thing dealt with trust issues in the face of impending doom.

I prefer to chew Bubbalicious, but Hubba Bubba will do.
Is this to say that Carpenter's craziness is dependent upon his films' messages and themes? Probably. But then again, maybe not.

craze-o-meter: 3.5, like how I insist on crank windows in my car because I might drive off a bridge. 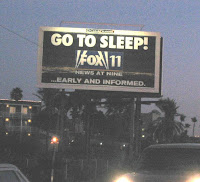 Proof that they live at Fox!
*Correction: the film is set in LA, not Cleveland.
Posted by DM at 12:16