Eye candy for kids
When I was a little girl I'd go to the video store and have to pass by the grown up movies on my way to the children's section. I distinctly remember seeing the box for this one and being both frightened and curious. I sort of wanted to see it, but was afraid I wouldn't understand it. The box art was appealing to a little kid: a fun title, a guy in a tank top, a truck. I never did rent it, not even when I turned 13 and could rent it without my parents' permission. Because I didn't think I'd get it, I was kind of scared it.

So I started watching horror movies instead.

And then I had the bright idea of watching all the John Carpenter films and I came face-to-face with BTLC once again. I was still trepidatious--the little girl inside me was still kind of scared of what was in store--but, with a grown up commitment to responsibility, I watched it.

Big Trouble in Little China stars Kurt Russell (again) in a very different role from either Escape or The Thing. This time he plays Jack Burton, truck driver and wholly unremarkable in every way. After winning money off his friend Wang Chi, Jack drives him to the airport to pick up Miao Yin, Wang's fiancee. At the airport Miao is grabbed by a Chinese gang who are in the employ of Lo Pan, an ancient magician trapped in the body of an old man. Lo Pan must marry and kill a woman with green eyes in order to appease the God of the East and regain his power. Wang and Jack mount a rescue and are aided by Kim Cattrall, who also has green eyes, and Egg Shen, an old wizard. In genuine Kim Cattrall style, she turns out to be more trouble than she's worth as she also gets kidnapped by Lo Pan.

You're sure this isn't a sequel to Duel?
The movie begins with Victor Wong, who plays Egg Shen, speaking with is attourney about the strange events that have taken place recently in Chinatown. Victor Wong tells the lawyer he must first believe in magic if he's to believe the truth of what happened. The film, however, doesn't end back in the office. Rather, it closes on Kurt Russell, driving away into the night. This, I think is a missed opportunity, a badly written beginning that could have made for a nice bookend. But instead of setting up the lawyer and the audience for a wild and hard-to-believe tale of ancient evil, wizardry, and kung fu, the flimmakers instead show all their cards right at the start: Victor Wong shows off his magic one minute into the film.

This, for me, really is the biggest problem with the movie. But the scene gets the job done in that it informs the audience on the kind of movie they're about to watch--a contemporary fantasy tale. A clever one, too. And funny. BTLC is part comedy, part fantasy, part kung fu movie all bundled together and set in 1986. There's no time travel, no alternate universe, and, this is very important, no kids. Though the film is PG13, it's about grown ups. 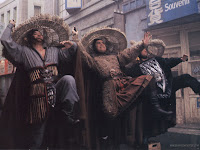 Hats are in.
You: Yeah, but so what? A lot of fantasy movies are about grown ups.
Me: That's true, but few are set in the real modern world. And since BTLC is set in present day San Francisco, and with the exception of four, maybe five, characters is about present day people, the film is different enough from both Conan-type and Crouching Tiger-type fantasies that makes them less accessible to a younger audience.
You: Aren't you forgetting a little something called He-Man?
Me: No, I'm not. That movie was made for kids. Now stop talking and let me get on with it.

In addition to the film being a comedy/fantasy mix, the main character is, strangely enough, not really the hero. Jack Burton is completely out of his depth caught in a Chinese fantasy brought to life; he doesn't understand or know anything about Chinese culture or history and he can't fight. Indeed, Kurt Russell is offscreen for most of the fights and when he does appear in these scenes, he's the comic relief. That's not to say Jack Burton is incidental, he does things and goes places no one else in the movie can do or go, it's just that he doesn't possess or have access to the knowledge or the skill to survive the film on his own.

The fact that this movie is totally different from anything we've seen so far doesn't necessarily mean Carpenter was any crazier at this point in his career than he was when we last saw his product. The the film's overall competence and humour have a sobering effect. 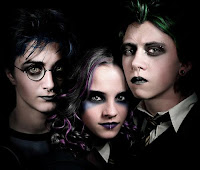 No word of a lie, I found this in a google image search for Big Trouble in Little China.
Posted by DM at 17:14

Thanks for god movies reviews. I am agreed with you at point "this movie is totally different from anything we've seen so far ". I am glad that i got a Chance of reading these reviews..