The Triumverate of Evil

I thought you had the beer.
When did it happen that smoking pot and having pre-marital sex would get you killed? Most everyone will tell you that Halloween was really the first to punish such morally reprehensible behaviours. Films like the Halloween, Nightmare on Elm Street, and Friday the 13th serieses, capitalize on a high body count, and teens get killed for engaging in smoking up, underage drinking, and having sex. But it wasn't really until Scream that these activities and their consequences were brought to the forfront of public perception. Scream's self-refelxsive premise introduced mainstream horror audiences to the fact that all genre films have certain things in common, death to anyone who behaves "inappropriately" being the most prevalent. Ironically, the notion of the virgin being the only person who can survive and defeat the killer is proven to be innacurate. Indeed, Lori Strode is, as Randy explains, the virginal final girl in Halloween, but Sidney begins Scream as a virign and both sleeps with and defeats Billy at the end of the movie. Additionaly, Alice, the lone survivor in Friday the 13th, is not a virgin but this is not mentioned, nor is any Jason movie referenced in Scream.

Alice, however, does not have sex in Friday, nor does she smoke up. But her dialogue and behaviour suggests that she has done both in the past. Lori, too, is not above getting high. Virgin she may be, but she smokes onsreen. And Syndey, who doesn't smoke pot or even talk about it, does have sex. It would seem then, that neither activity on it's own is enough to warrent death, but both together are a death sentence. But, confusingly, secondary and terriary characters in all movies are killed with impunity, regardless of thier actions. 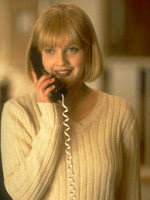 The main factor in all these cases is beer. More so than drugs or sex, alcohol appears to be the common denominator in slasher movie deaths. Though drugs are always illegal, and sex is only frowned upon, alcohol occupies a middle-ground; fine for adults but not for teens. These kids, however, are caught up in an adult situation. They are being stalked and killed by a grownup and having to rely on their wits for survival as no one--no adult or authority--will come to save them. When considered further, the issue seems to be one of age. The is no legal age for drugs, but there is for sex and booze. A lot of horror movie characters are over sixteen, the legal age for sex, but are not yet twenty-one. They are stuck somewhere between childhood and adulthood, and therefore cannot be faulted for some decisions but are fully responsible for others.

So, when we again consider Lori, Alice, and Syndey, we can reasonably state their survival is more dependent on their abstinance from alcohol than anything else. Why then, is the emphasis on drugs and sex in post-modern horror? I think because, between the three, alcohol is the lesser evil. Drugs, regardless of kind, are bad. Teen sex, or pre-martial sex, is religiously immoral. Underage drinking, however, is forgivable. Indeed, many of us have enjoyed a drink at home with family while still technically underage.

The emphasis on drugs and sex, however, is only really present or prevalent in movies made after c.1995. Before that time, though everyone smoked pot and slept around, it was treated with a certain amount of innocence. Weed and sex was something that existed in every day life, accepted and expected. After Scream, films like Cabin Fever and Jason X, drew extra attention to pot and sex, elevating their status as deadly pursuits. The result is now a driving need to write drugs into horror movies, and increase sexual encounters (and nudity) as well as the consumption of alcohol. Doing so, however, causes the films to become unintentionally pseudo-self-referential, breaks the suspension of disbelief and somewhat distances the audience. 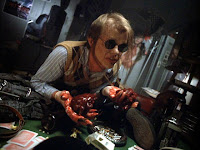 This is what happens when I drink and smoke up. Every goddamn time.
Posted by DM at 17:33