Things in the Night

Lower your light, it's right in my eyes!
I'd forgotten how gross this movie is.

The movie begins with a couple of Norwegians hunting a dog from a helicopter. The dog finds shelter at an American Antarctic research station which sets off a series of events that eventually culminates in Kurt Russell saving the world.

It really is a fantastic film. Argued as being Carpenter's best work, The Thing didn't do very well in theatres though critics liked it a lot. I think the problem might be though it's a movie about an alien that takes over your body, it can read a bit slow. Low on action and high on tension and gore, The Thing is a story about paranoia and fear. 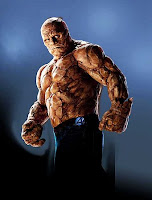 Not to be confused with this thing.
Set in Antarctica, the movie follows the story of the men at an American research station who find themselves under attack by an alien that has infiltrated their camp. When the men at last realize and deal with the alien menace, it's already too late. Someone has been infected, but they don't know who. Worse, their communications are knocked out and their transportation is destroyed. It will be months before the men can get out, but rescue takes a back seat to the more pressing matter of the alien among them.

Part of The Thing's success as a story is rooted in the idea that you can't always trust the people you know. The claustrophobic setting heightens the paranoia, as the men really have nowhere to run. But they share their isolation with the alien, and so the film is also about preservation and sacrifice.

Bad mood.
The movie marks Carpenter's return to horror and is, in my opinion, nearly perfect. In this movie it is possible to track back to Carpenter's earlier films. The anticipation and fear of both Assault and Halloween are present throughout as is the sense of helpless isolation that was present in Adrienne Barbeau's terrifying scene in The Fog. New this time round is the sense of horrified fascination with the Thing itself. The camera doesn't shy away from the creature and as the men are witness to its horror, so are we.

And talk about gross! The creature effects are outstanding. I first saw this movie a long time ago. Watching it again, when it came to the part where you first see the Thing in action, I remembered back to that initial viewing. I was totally grossed out then. And I was again, just now. There's something about physical effects, a tangible quality that's lost with CGI. So the other part of The Thing's success is, I believe, the monster effects. Rob Bottin created something completely alien, something that lies so completely outside our understanding or experience, that we empathize with the characters on screen, we share in their horror when we come face to face with the Thing.