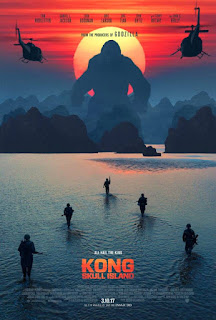 When I first saw the trailer for Kong: Skull Island, I joked about how it looked like a cross between a monster movie and Apocalypse Now. Turns out I was right on the money.

Just days after Nixon announces America's withdrawal from Vietnam, a team of researches under military escrot heads to the mysterious Skull Island in the western Pacific Ocean. Shortly after their arrival, the Landsat and Monarch scientists get to work mapping the island's geology. Their efforts raise the attention and ire of Kong, a giant gorilla who makes short work of downing the team's squadron of helicopters. Split into two groups, the survivors are on different paths: the civilians want to get off the island; the soldiers want to kill Kong.

For being a big, dumb monster movie, Kong: Skull Island is surprisingly nuanced. That's not suggest the film is at all subtle about its themes (it isn't) but it successfully captures the politics and ideology of the era. Sure, it overstates things at times--to wit, the animosity between the anti-war photographer and the commander--but the film is as much about the folly of war as it is about giant monsters.

Which brings me to Apocalypse Now and its source material, Heart of Darkness. Instead of a half-crazed army colonel, Skull Island features an obsessive lieutenant colonel, a soldier without a war. Echoes of Conrad's Marlow are found in Lt.-Col. Packard. Packard finds an enemy in Kong and insists his mission is to kill the giant primate. Packard's self-induced obsession is similar to Marlow's mild obsession with finding and meeting Kurtz.

Complicating this reading of Skull Island is the presence of a character named Marlow who's been living on the island for the past thirty years, having been marooned during WWII. This Marlow is a jovial fellow who made friends with the natives and serves as a kind of guide to the newcomers. Although he would make a fine parallel for Kurtz (minus the insanity), he welcomes the opportunity to return home, and is really nothing like his namesake.

There's also a character named Conrad. Just in case you weren't sure about the whole Heart of Darkness thing. And then there's the Japanese poster which makes it absolutely clear we're dealing an Apocalypse Now-with-monsters scenario. 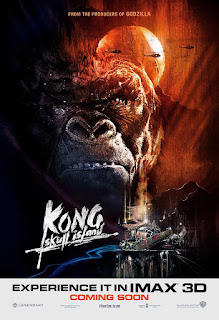 If, like me, you were disappointed with Godzilla's misunderstanding of its own subject matter, you'll be pleased to hear that Skull Island knows exactly why people go to see monster movies. The human drama drives the narrative, but doesn't overshadow the monster. Indeed, Kong takes up a lot of the screen and his fights--and there are many--are easy to watch an appreciate.

Godzilla "fans" will notice a tie-in with that movie, but the real treat comes at the end of the film where, in a post-credits scene, the audience gets a taste of what's to come.

I hesitate to suggest that Skull Island is better than it has any right to be but still it's more fun and entertaining than expected. The film's second trailer, released just days before the premier, is a master class in editing and the film manages to deliver on its promise of thrilling adventure. Skull Island itself is beautiful and terrifying, and director Jordan Vogt-Roberts' patience with the camera means we get to see and experience all of the island's wonders. Moreover, the movie is violent and gross in a really satisfying way; a true creature feature.

Well I thank you DM, I've been on the fence about seeing this in the theater but now it seems worthwhile.

I am disappointed that it wasn't taken from the Doc Savage/King Kong x-over but ...