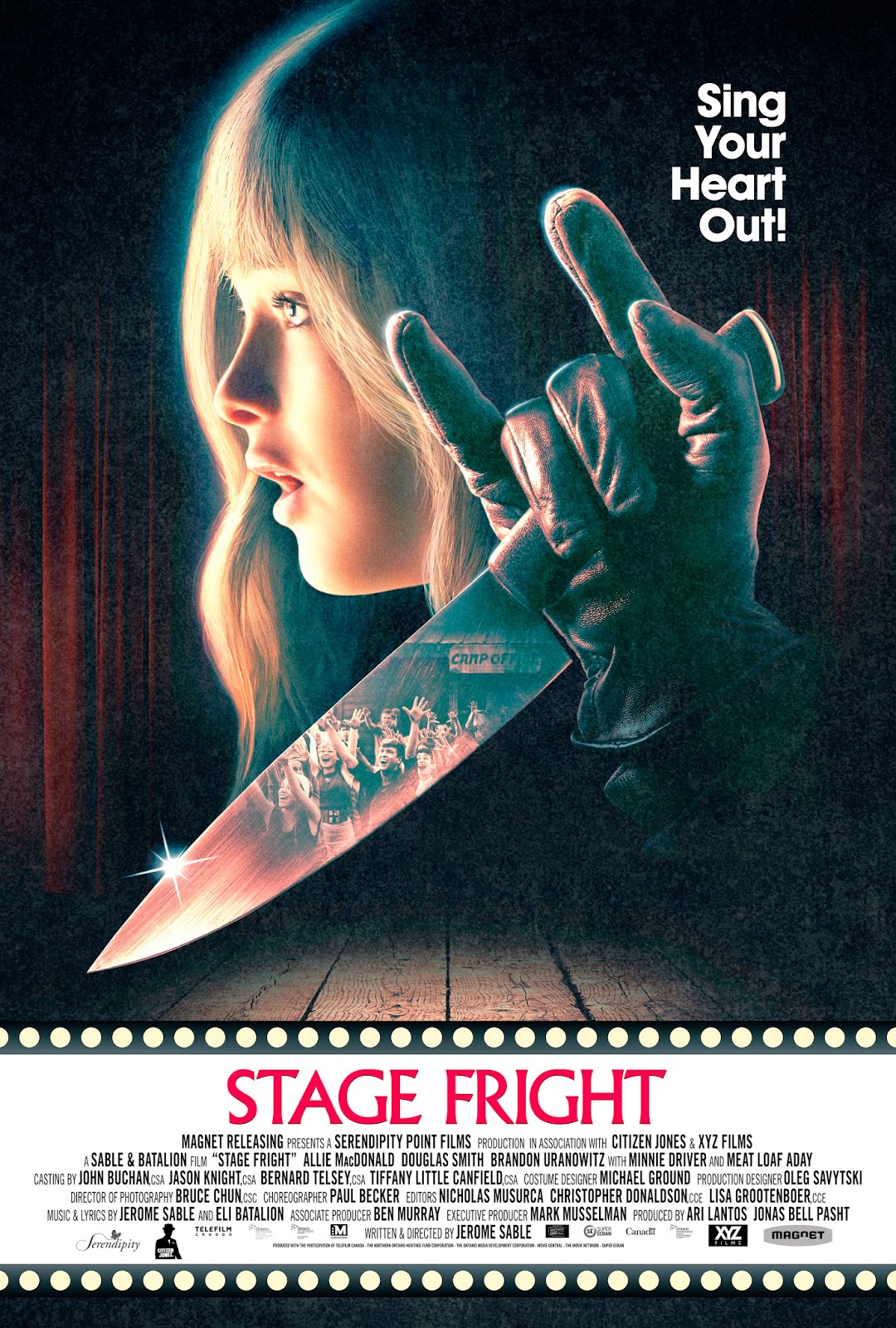 To begin, an overdue congratulations to Telelfilm for pulling its head out of its ass. This is the second film I've seen inside a week that was high caliber genre made with Telefilm money. And to think all it took was a boy from Halifax winning an international, high profile movie trailer competition.

Now, onto the show!

I used to really like musicals. I'd fall asleep listening to the Cats soundtrack and I knew all the words to every song in Phantom. Then I kind of aged out of musical theatre. Of course, I'd see a musical or two at Stratford--it is Stratford, after all--and I made a point of seeing Giant Killer Shark: The Musical, but I never bothered with Lion King or War Horse. I've not seen Les Mis, to this day.

Genre musicals were/are a different matter. Once More With Feeling, Evil Dead, Dr. Horrible, Dead and Breakfast. Seen and loved them all. I think it has to do with the horror/comedy opposition. As Noel Carroll points out, horror and comedy exist on the same spectrum; both deal in absurdity but it's the presentation of that absurdity and our reactions to it that differ.

Stage Fright is a horror comedy musical, which is just about as absurd as you can get. Set at Center Stage, a  musical theatre camp, the camp director, Roger McCall, decides to mount The Haunting of the Opera. This particular musical has special significance because McCall produced Haunting ten years ago when the star, Kylie Swanson, was murdered on opening night. McCall took in her orphaned children who now work as kitchen staff at the camp. Camilla Swanson, Kylie's daughter, auditions for her late mother's role hoping it will bring her closer to her mom.

She kills it, of course.

As the camp prepares for their rendition of Haunting, a masked madman prepares himself for a killing spree that he hopes will prevent the show from taking place. But the show must go on!

Stage Fright pokes fun at both the horror and musical genres. Admittedly, I don't know much about musicals, but I know enough to recognize a satire of schmaltzy, overblown, Andrew Lloyd Weber-style musicals. Haunting, of course, is a take on Phantom of the Opera which is then mounted with a Kabuki theme by the kids at camp. Within the world of the film, this is a misguided attempt at further dramatizing a melodrama.

"What is at the heart of Haunting?" asks the director. "It's about covering up who you really are."

Of course that's not true, but it's his way of introducing his own misinterpretation of Kabuki as a way to showcase the "themes" of Haunting.

Within Stage Fright the film, covering up is exactly what's happening in one way or another. Kabuki also hinges on the spectacle of performance, and a horror/comedy/musical about a musical is truly spectacular. The delightfully fluffy and cheerful musical numbers sung by the kids at camp are offset by the killer's rock soliloquies. Dressed in a black and white mask, the glam rock Metal Killer echoes Kiss and was inspired by Ozzy and Metallica, and he spouts punny one-liners for the benefit of the audience.

Without getting too postmodern, Stage Fright knows its a movie and what's more, understands its heritage. In the same way the film's musical aspects draw from and satirize musical theatre, Stage Fright pays homage to Carrie, TCM, Halloween, ANOES, and Hellraiser. As a further tribute to classic horror, most of the gore effects are physical effects, and there's very little CGI.

The mystery of the Metal Killer isn't especially hard to figure out, but the Stage Fright experience is really more about watching the show. The film is both an accomplished musical and horror movie, funny and violent with good gore and clever kills. Drawing on operatic traditions, the lead is a soprano and her patriarch is a (sort of) bass; listen out for a joke about the secondary status of altos. Everything is overdone, from the lyrics to the kills, reveling in the shared ambition of spectacle and performance.

You knew all the lyrics in Phantom? I don't remember Billy Zane singing in that film.

I'd watch anything with Billy Zane singing in it.

I found your site very beautiful and distinguished too. Thank you for your good work and continue.
obat telat datang bulan
obat penggugurkan kandungan

Thanks for sharing the good and useful information here on the blog for us.
obat aborsi
tanda tanda kehamilan